Toys of an era

The 60's and 70's constituted a true "golden age" for the Spanish toy companies. The quality of their products increased during these boom years, in which manufacturers and industries like Geyper, Famosa Feber, Comansi, Rico, Paya, Madel, Exin, Cefa, Airgam and many others proliferated, most of them now extincted, which made fly the imagination of a child. Until the decade of the 70 most products found in spanish toy shops were made in Spanish, a diametrically opposed situation in current date.

The entertainment of a child 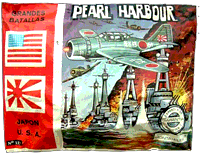 In that era a child could find toys in kiosks, stalls, drug stores, toy stores and in the few large areas that existed at the time. From marbles, paratroopers and mountable plastic soldiers (the heirs of lead and tin soldiers of previous generations) to complex radio controlled toys and electronics, that began to poke his head shyly at the end of the decade and with prices that only wealthier pockets could afford.

Spanish TV aired only for a few hours a day in just two channels, and spent a gap limited for children. There were no electronic machines or computers in homes (as was to have a Cinexin and repeat hundreds of times those mute films just over a minute in length projected onto the ceiling of the bedroom in the dark), so at that time was not unusual to see children playing in the streets after leaving school at the top, rope, a bicycle, marbles or jacks, in addition to the eternal soccer ball.

Building sets, card games, collectible stamps, cutouts, comics with Carpanta, Clever and Smart, Captain Trueno or Zipi and Zape filled shelves and desks. Santi Rico engineer showed us their wonderful remote control cars and we rescued astronauts with the "Space Rescue" toy. With construction sets like Tente and Exin Castlillos we made pharaonic buildings. Many entertainments, and at a very high quality.

In this lifestyle, far despite the few years that have elapsed, children eagerly consumed every toy that fell into their hands as one of their main entertainment, and action figures became one of the most appreciated toys among them.

Taking as reference the adventurers, soldiers, hunters, pirates, cowboys and Indians who lived in the movies shown on the theaters, action figures (formerly called simply "dolls") were representing the same characters on unlimited adventures for our imagination. The realism achieved by figures like Geyper Man, Madelman or even simpler ones like Airgam Boys or FamĂłbil (the first playmobil produced in Spain by Famosa) helped the child to get into the game, starring odysseys that they would remind as adults.

Shortly after starting the 80's that picture would change dramatically. An economical crisis which would lower sales and dramatically raise prices of raw materials, mass production in other countries like China with cheaper labor and the growing interest of the new generation on emerging new technologies or science fiction took ahead to a few toy companies that were unable to adapt to the changing landscape.

Changing habits gradually made the few action figures sold today are franchises cartoons or movies, representing not only anonymous heroes but known characters.

Still, those who were children at that time could not have otherwise understood entertaining, and we keep the memory of happy childhood times, closely linked to the toys that accompanied us.